Octavo, 279pp, [8]. Illustrated softcover. Appears unread. Touch of shelf wear along bottom edge. Inscribed by General David Petraeus: “For Vanessa Davitt, with thanks for your great support of the men and women in uniform who have turned the ideas and concepts in this manual into action on the ground in Iraq and Afghanistan – and have done so selflessly, courageously, and creatively! David H. Petraeus.”

General David Petraeus is a retired army general, who served as the head of U.S. Central Command and Commanding General, Multi-National-Force-Iraq. As Commanding General in Iraq, he oversaw the “troop surge,” which arguably broke the ongoing counterinsurgency in the country, allowing for a reduction in troop strength in the country. After retiring from the army, he briefly served as the director of the CIA. 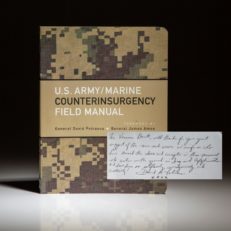