Quarto, 210pp. White leather, title embossed on spine and front cover. Stated “first edition” on copyright page. Leather on spine beginning to detach, reinforced by a local bookbinder. Text block is solid and free of any marks. Housed in the publisher’s blue cloth slipcase. This book is from a limited edition of 2000 copies, this being number 1103. Signed by the author and President Ford on the translucent overlay for the half-title. It does not appear that President Ford signed every limited edition, only a handful.

President Gerald R. Ford (1913-2006) spent much of his vacation time and eventual retirement in Vail, Colorado. While in the White House, the Ford family took frequent trips to Colorado. After losing the presidency in 1976, he built a retirement home in Beaver Creek, which remained in the family until his death in 2006. 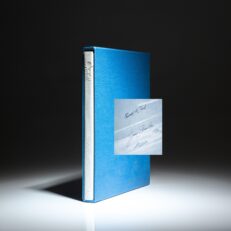 You're viewing: Vail: Story of a Colorado Mountain Valley $375.00
Add to cart