Octavo, [x], 36pp, [2], 32pp, [14]. Bound with Speech by Elihu Root at Carnegie Hall (1916). Light blue cloth, title in gilt with original leather label on spine. New cloth binding and endpapers, solid text block. Free of any marks or notations. Signatures in pencil on two front flyleaves. From the collection of Charles D. Hilles, with his laid-in card. A unique collection of signatures from the 1916 New York Republican Convention, where Elihu Root was an early favorite, but later withdrew due to his age. 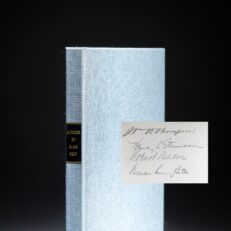 You're viewing: A Blundering Administration $750.00
Add to cart