First edition of A History Of The Campaigns of 1780 and 1781 by Lieutenant-Colonel Tarleton, published in 1787. Quarto, vii, [1], 518pp. Bound in period brown morocco, title in gilt on spine over red morocco, decorative gilt bands. Reinforced front hinge, bookplate removed from front end paper. Some edge wear. Lacking [2pp] advertisement at rear. Complete with 5 Maps (Three large folding / two fold-out), with hand colored routes of troop movements and positions. Large fold-out map at front titled: “The Marches Of Lord Cornwallis In the Southern Provinces, Now States of North America; Comprehending The Two Carolinas, With Virginia and Maryland, and The Delaware Counties. By William Faden. Geographer to the King.” All maps in near fine condition, lacking any tears or foxing. Housed in custom cloth blue clamshell case, title in gilt on spine over red morocco. (Sabin 94397) (Church 1224) (Howes T37) An exceptional copy of this important work.

Comments: Sir Banastre Tarleton wrote A History Of The Campaigns of 1780 and 1781 upon returning to Great Britain after the surrender at Yorktown. He would go on to serve as a Member of Parliament. 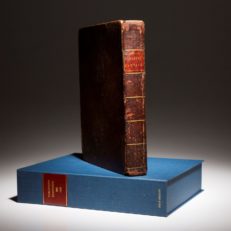