Twelvemo, [12pp]. Printed wraps, title in gilt with decorative flag on front cover. Stapled pamphlet. Back panel notes that “additional copies available from the publisher 6c.” Also included is the republication of this speech from the papers of John Valentine, dated 1950. An exceptionally scarce pamphlet, with no mention in Halter and no auction records except for this copy.

Comments: The War Crisis speech contained in this pamphlet would enter the popular lexicon as the “Stab In The Back” Speech. Delivered at the commencement ceremonies of the University of Virginia, President Roosevelt admonished Italy for declaring war on France and entering World War II. His remark that: “On this tenth day of June, 1940, the hand that held the dagger was struck into the back of its neighbor,” was initially opposed by his advisors, but on the train ride to Charlottesville he changed his mind and made headlines. 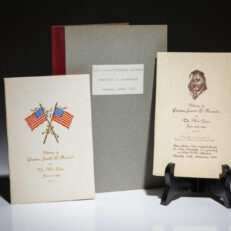