An Answer To The Declaration of the American Congress

Comments: This work presents a detailed response to the Declaration of Independence, quoting in full each of the twenty-eight objections to the policies of the British Crown and followed by harsh comments. After publication of the first edition, later editions did not include the text of a proposed “counter-declaration.” The original publication was anonymous, but has been attributed to John Lind, who was an English barrister, political activist and writer opposed to the American Revolution. A scarce pamphlet. Other works by John Lind include: Remarks on the Principal Acts of the Thirteenth Parliament of Great Britain (1775), An Answer to the Declaration of the American Congress (1776), Three Letters to Dr. Price, containing Remarks on his Observations on the Nature of Civil Liberty, by a Member of Lincoln’s Inn (1776), Defense of Lord Pigot (1777) and A Letter to the Rt. Hon. Willoughby Bertie, by descent Earl of Abingdon, in which his candid and liberal treatment of the new Earl of Mansfield is fully vindicated (1778). 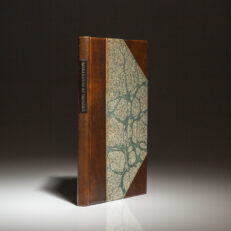 You're viewing: An Answer To The Declaration of the American Congress $875.00
Add to cart