An Essay On The Principle Of Population

× Ask a Question re: An Essay On The Principle Of Population
SKU: 10970 Categories: Business & Economics, Science

The Third Edition of An Essay On the Principle of Population by Thomas Malthus.

Octavo, [two volumes], xvi, 505pp, [70pp index]; vii, 559pp. Period full calf, titles in gilt on spines over black labels, gilt decorations on spines. Previous ownership inscriptions on front endpapers of both volumes. Bookseller’s label on front pastedown endpaper of Volume I. Leather is worn, with some loss at top of spine of both volumes. Text block stable in both volumes, general and even toning to leaves. Text block free of any marks or notations. (Goldsmiths 19210) (Kress B5067)

The first edition of An Essay on the Principle of Population as It Affects the Future Improvement of Society was published anonymously by Malthus in 1798 as a pamphlet. The book received wide attention for Malthus’s argument that hopes for human happiness are in vain because population will outrun the growth of production. He believed that the human population would continue to grow unchecked, resulting in long term human poverty, now known as the Malthusian Law of Population. Until this point, fertility was viewed as a national imperative and a path to continued economic improvement. This work by Malthus changed the national mindset in Great Britain about childbearing. This work first appeared in book form in 1803, with this copy being the third edition, published in 1806. 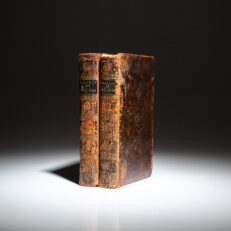 You're viewing: An Essay On The Principle Of Population $1,200.00
Add to cart