Inscribed by Secretary of State Edward Everett to vice presidential nominee Francis Granger, An Oration, delivered in New York on the Fourth of July, 1861.

Two years after delivering this oration in New York, Edward Everett was asked to give the principal oration at the dedication of the soldiers’ cemetery in Gettysburg, Pennsylvania. His remarks, which lasted 2 hours, were best remembered for their contrast to Abraham Lincoln, whose Gettysburg Address lasted 2 minutes. In a follow-up letter to Lincoln, Everett said: “I wish that I could flatter myself that I had come as near to the central idea of the occasion, in two hours, as you did in two minutes.” 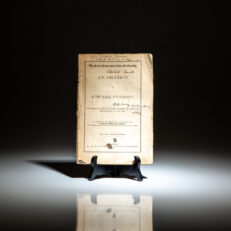