First edition of Andersonville: A Story of Rebel Military Prisons by John McElroy.

John McElroy (1846-1929) was sixteen when he joined the Union Army, and was captured by Confederate soldiers in Virginia just one year later. Andersonville details his experience as he was transported between multiple military camps throughout the South. He was released from captivity at the end of the war and moved back to the North to rejoin the printing trade and write this book. 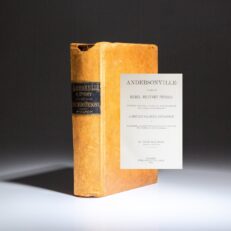 You're viewing: Andersonville: A Story Of Rebel Military Prisons $125.00
Add to cart