Octavo, 156pp. Blue cloth, title in silver on spine. Stated “First Published in 1976” on copyright page. In the publisher’s near fine dust jacket, retail price on front flap, trace of shelf wear, otherwise fine. Includes the bookplate of Douglas Fairbanks, Jr. on the front pastedown endpaper. Inscription reads: “Inscribed for Doug, In friendship and with best wishes from Anthony. May 1976.”

Prime Minister Anthony Eden met Douglas Fairbanks, Jr. aboard the RMS Aquitania in 1938, where the two interventionists discussed the inevitable confrontation with Germany. It is suggested that Fairbanks was a member of the CIA after WWII, acting as an important back channel to the British government via Anthony Eden. Eden served as Prime Minister of Great Britain from 1955-1957, following the resignation of Winston Churchill. His short tenure as Prime Minster was overshadowed by the Suez Crisis, where he was unable to gain the support of the United States for his Anglo-French military response to the situation. He resigned shortly thereafter due to health reasons. During his lifetime he was a prolific author, writing Days for Decision in 1949, The Eden Memoirs: Full Circle (1960), The Eden Memoirs: Facing the Dictators (1962), The Eden Memoirs: The Reckoning (1965) and finally Another World 1897-1917. 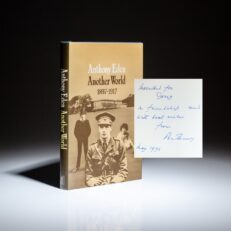