Although commonly remembered for their published works, James Whitcomb Riley (1849-1916) and Eugene Field (1850-1895) performed across the United States in a joint act during the late 1880s. Bill Nye (Edgar Wilson Nye), a beloved humorist, rounded out the trio of entertainers. The three men were called “the greatest humorous trio in America” and were photographed together at the time of their first appearance in Indianapolis in 1886. (Indianapolis Journal, January 17, 1886, p. 5) 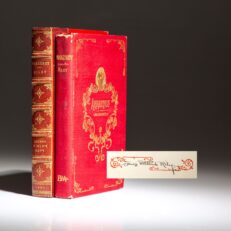