As We Remember Joe

× Ask a Question re: As We Remember Joe
SKU: 658 Categories: Kennedy Family, Presidents

The first edition, first issue of this book is distinguished by the red wings in the center of the title page. The second issue of this book, privately printed by Robert Kennedy in 1965 as a Christmas Gift for family and friends, has the title page printed in all black. Only 250 copies of this second edition were believed to have been printed. This book was edited by John Kennedy as a tribute to his brother, Joe Kennedy, who was killed in action during World War II, while serving as a bomber pilot. An incredible example of this scarce work by President John. F. Kennedy. 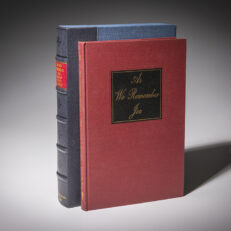