Quarto, [450pp]. Rebound in full brown leather, blind stamped with decorative embellishments. The first 40 pages are covered with newspaper articles. This ledger dates from 1849-1857 and includes thousands of registrants, their homes and travel destinations. A few of the notable signatures include: future President James Buchanan from 1856, traveling to the White House, an “Infant Violinist,” hundreds of Ohioans heading to California and Nevada to prospect for gold, railroad delegations, and what appears to be the signature of Tennessee Governor and future President Andrew Johnson. An exceptional piece and a who’s who from 19th century America.

The Bostwick House in Canfield, Ohio was a hotel and railroad ticketing station, owned and managed by L.L. Bostwick. It was one of the premier taverns in eastern Ohio during the 1840s and 1850s. By 1883 the “landmark” hotel had fallen into a state of disrepair. It was sold in 1885 and renamed the Park Hotel. It was finally purchased in 1902 by John Neff and demolished in June 1906. The Bostwick House Guest Book, a similar document to this ledger, is held by the Canfield Historical Society in Canfield, Ohio. 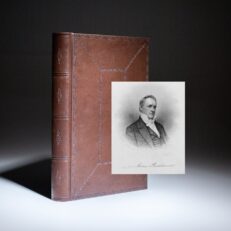