Contract with engineering firm to pave specific roads in the City of Buffalo. Document is signed twice by Grover Cleveland, who was serving as Mayor of Buffalo at the time.

Comments: When this document was signed, future President Grover Cleveland was serving as Mayor of Buffalo. Within two years, he would be nominated for the Governorship of New York, where he would gain national notoriety for fighting political corruption, specifically Tammany Hall in New York City. He would go on to serve the only nonconsecutive presidential terms in history, serving from 1885-1889, then again from 1893-1897. 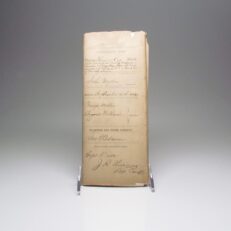