Alice Roosevelt Longworth (1884-1980) was the daughter of President Theodore Roosevelt and his first wife, Alice Hathaway Lee. She was married to Nicholas Longworth III, 38th Speaker of the U.S. House of Representatives, until his death in 1931. Alice would spend the remainder of her life in Washington DC, working through political circles and supporting causes she believed in. She died in 1980 at the age of 96.

Margaret Sanger (1879-1966) was a lifelong advocate for birth control, a term she popularized. She opened the first birth control clinic in the United States and laid the foundation for organizations such as Planned Parenthood. 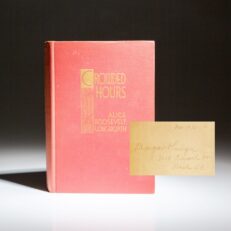