× Ask a Question re: Days of David Ben-Gurion – Seen In Photographs And With Text From His Speeches And Writings
SKU: 1388 Categories: Father's Day, Holiday Gifts, Israel, Prime Minister

Signed limited edition of Days of David Ben-Gurion. Quarto, 157pp. Blue cloth, title printed on front cover. Blue end papers. In publishers acetate dust jacket, illustrated with image of Ben-Gurion, some loss at top of spine, light toning to plastic. Housed in custom black cloth slipcase. Book is signed by David Ben-Gurion on title page, with limitation on copyright page which reads: “This is a Special Edition limited to one hundred and fifty copies of which this is No. 64.”

Comments: David Ben-Gurion was the first Prime Minister of Israel. He was known as Israel’s Founding Father for the role he played in establishing the nation. 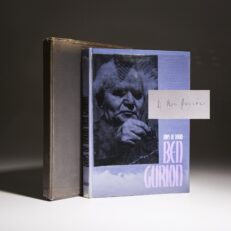 You're viewing: Days of David Ben-Gurion – Seen In Photographs And With Text From His Speeches And Writings $1,100.00
Add to cart