This book is the official memoir of former President George W. Bush. He breaks up his time in office into a series of “Decision Points” or pivotal moments for his administration. From the defining moments of his life growing up the son of President George H.W. Bush, through his time as Texas Governor, to his first person account of the events of September 11th, 2001, this book makes for an interesting read for historians and non-historians alike. 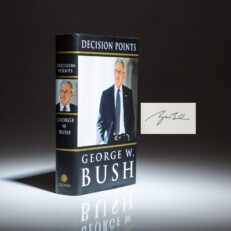