Henry A. Wallace (1888-1965) served as the 33rd Vice President of the United States alongside Franklin D. Roosevelt from 1941-1945. He was considered too liberal for party leaders going into the 1944 Democratic National Convention and was replaced by Harry S. Truman. 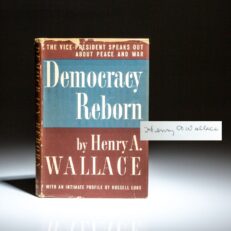