Three ring binder (6.5″ x 9″), black leather, illustrated endpapers. Includes 22 individually typed entries and 11 pages of newspaper clippings. Includes a partial transcription of the journal. Housed in custom olive cloth clamshell, title in gilt on spine over red morocco label. A historically interesting piece of Roosevelt-era history, with details of the mundane workings of the White House to her description of the mood in the White House just prior to the breakout of World War II.

?Since writing last the world has been fairly torn apart and put together again. The war was averted largely through the efforts of our own President [who] sent a personal message to Adolf Hitler and Premier [Prime Minister] Chamberlain, advocating arbitration, and later sent a personal message to Mussolini requesting him to use his influence with Hitler to persuade him to hold his troops out of Czechoslovakia until it could be discussed by the interested powers? – October 3, [1938]. 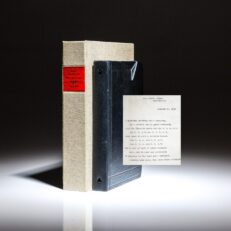