From the father of Jimmy Carter, campaign letter to elect Earl Carter as Representative in the General Assembly from Sumter County.

James Earl Carter Sr. (1894-1953) would go on to win this election and serve briefly in the Georgia House of Representatives. He died in 1953 of pancreatic cancer. His death would lead his son, Jimmy Carter, to leave the Navy early and return to Plains. Carter would later credit his father with shaping his “work habits and ambitions” and sparking his interest in politics. 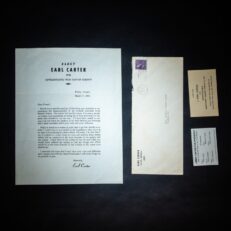 You're viewing: Elect Earl Carter For Representative From Sumter County $175.00
Add to cart