Commander David Enderby Blunt spent fifteen years in the Royal Navy until he was released from service in 1919. In 1925, he became a Cultivation Protector for the Game Preservation Department of Tanganyika, where Tanzania is located today. Blunt was employed to cull elephants to reduce the destruction of native gardens and crops. In his first year with the Elephant Control Scheme, he shot ninety elephants. 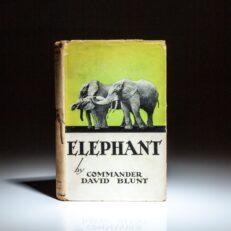