Grover Cleveland began his unlikely rise to the presidency as the Mayor of Buffalo. Within a year of taking office, he became Governor of New York. He gained national notoriety for fighting political corruption, specifically Tammany Hall in New York City. Cleveland went on to serve the only nonconsecutive presidential terms in history, serving from 1885-1889, then again from 1893-1897. After leaving office, the former president indulged in his lifelong passion for sports, ultimately writing this humorous book, Fishing and Shooting Sketches, two years before his death. 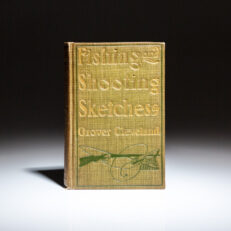 You're viewing: Fishing and Shooting Sketches $350.00
Add to cart