Investigations On The Theory Of The Brownian Movement

× Ask a Question re: Investigations On The Theory Of The Brownian Movement
SKU: 11497 Category: Science

First English edition of Investigations on the Theory of the Brownian Movement by Albert Einstein, translated by A.D. Cowper, in the publisher’s dust jacket.

Octavo, viii, 124pp. Green cloth, title stamped in white on spine. Statement on copyright page, noting “This Translation First Published in 1926.” A near fine example, faint toning to leaves, free of any marks or notations. In the publisher’s exceptionally scarce dust jacket, in a delicate condition, retail price on front flap, wear and separation at hinges, stable in mylar protection. A scarce piece. (Weil 129a)

Initially published in 1905 in the journal Annalen der Physik, Einstein’s work on the theory of Brownian movement would provide the foundation for molecular physics. It was followed by a second paper in 1908, which suggested ways to test his theory. This work is the translation of Untersuchungen ?ber die Theorie der ‘Brownschen Bewegung,’ published in Leipzig by Akademische Verlagsgesellschaft in 1922 (Weil 129). The theory of Brownian movement was tested by Jean Baptiste Perrin, who won the Nobel Prize in Physics in 1926 for his experiments. 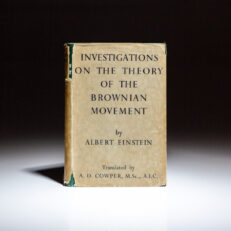 You're viewing: Investigations On The Theory Of The Brownian Movement $1,250.00
Add to cart