Comments: John Connally served as the United States Secretary of the Navy for President John F. Kennedy before being elected as the 39th Governor of Texas. When Kennedy visited Dallas in November of 1963, Connally was riding in the car with Kennedy and was shot by Lee Harvey Oswald. After serving as the Governor of Texas, he campaigned for Richard Nixon and was briefly considered to replace Spiro Agnew, but the confirmation of Gerald Ford was considered easier to accomplish. He ran for President in 1980, but dropped out early in the primary. In retirement, he wrote his autobiography, In History’s Shadow: An American Odyssey. His wife, Nellie Connally, wrote From Love Field in 2003. 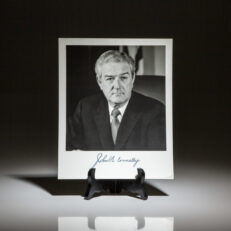