Personalized letter from Ohio Governor Salmon P. Chase to Ohio Supreme Court jurist, Rufus P. Ranney. On Executive Department stationary, dated November 17th, 1856. Remnants from hanging on the verso of the letter and previously folded. Housed in custom blue cloth folio, title on label affixed to front cover. Addressed to the Honorable R.P. Ranney of Warren, Ohio, who had just resigned his seat on the Ohio Supreme Court. In this letter Chase expresses his respect and “sentiments of care [and] esteem I have long-cherised for you.” In 1857, shortly after returning to private practice, Ranney was appointed the U.S. District Attorney by President James Buchanan. In 1859 he ran for governor of Ohio, but was defeated by William Dennison. In 1881, Ranney was appointed the first president of the Ohio Bar Association. A unique letter with excellent association between two historical figures.

Comments: Salmon P. Chase served as the sixth Chief Justice of the United States, 23rd Governor of Ohio, United States Senator from Ohio and the 25th Secretary of the Treasury in the Lincoln administration. 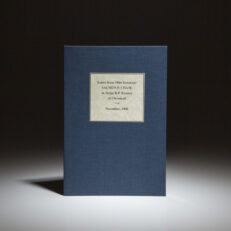