Originally published in 1864 by King & Baird of Philadelphia, this edition of Libby Life by Lieut.-Colonel F.F. Cavada was published the following year by J.B. Lippincott & Co. This copy is inscribed on the front free endpaper by fellow prisoner of war Alfred R. Calhoun.

Born in Kentucky, Alfred Rochefort Calhoun (1843-1912) served in the First Kentucky Cavalry during the Civil War. Captured in Tennessee, Calhoun was sent to Libby Prison in Richmond, Virginia and later paroled. Calhoun lost a leg during the war and was mustered out with the rank of major. After the war, Calhoun had a varied career. He worked as a literary and drama critic for the Philadelphia Press, did survey work out West for the Union Pacific Railroad, and worked as a special artist for Harpers Weekly. He later worked as a journalist for several New York newspapers; collaborated on the play, The Color Guard: A Military Drama in Five Acts; and wrote several books, including Kohala of Hawaii: A Story of the Sandwich Islands Revolution, Maud Morton: A Novel, and How to Get on in the World; or, A Ladder to Practical Success. Calhoun died at his home in Brooklyn in 1912. 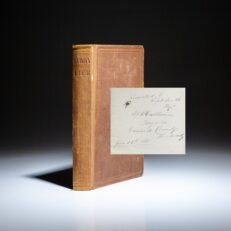