A scarce pamphlet signed by future President Gerald R. Ford at the Lincoln Tribute of 1972.

Octavo, 52pp. Illustrated paperback, bound at spine with staples. Internal text clean. Housed in custom blue cloth chemise with title on label affixed to front panel. Inscribed by numerous members of the Michigan Republican Party, including “Jerry Ford,” while serving as the representative of the 5th District of Michigan.

Comments: Shortly before his nomination as vice president of the United States, Representative Gerald R. Ford was the congressman representing the 5th District of Michigan. He was the house minority leader from 1965-1973, with the ambition to become speaker of the house. He promised his wife, Betty Ford, he would make one more attempt at the leadership in 1974 before retiring in 1976, but history would take his career in a different direction. 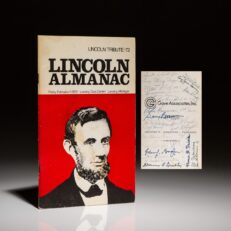