Kingsley Amis (1922-1995) was an English writer who, in 2008, The Times of London included on its list of “50 greatest British writers since 1945.” Lucky Jim is one of Amis’ best-known satirical comedies.Christopher Clark Geest, whose bookplate and annotations are in this copy, was a noted Virginia historian and bibliophile. 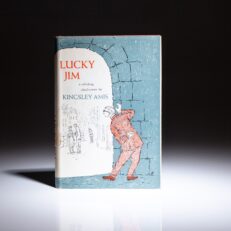