Pocket diary belonging to Sergeant James B. Hudson of Company I, 7th Regiment U.S. Veteran Volunteer Infantry. Includes a photograph of Sergeant Hudson in his uniform.

Twelvemo, [212pp]. Leather pocket diary. Covers rubbed and worn, half of rear flap missing. Page block detached from spine, but still held to covers by one binding cord. Some signatures loose, but page block is stable. Most of the interior rear pocket is detached from back cover, but still holding along bottom edge. Faint foxing to pages and some light soiling. Contents written in ink of various shades, but handwriting is legible. Hudson’s name is written on the front and rear pages. Contains diary entries from April 12, 1865 to April 11, 1866; two lists with names of officers and privates in Company I (one dated October 1st, 1865); list of deserters; list of men furloughed; record of finances; miscellaneous notes, including some poetry which appears to be written by Hudson. Two leaves torn from page block, but all daily diary entries are present. Laid-in contemporary photograph of Sgt. Hudson in uniform, measures 3.25″ x 2.5″, worn along the edges with some stains on image, appears to be a carte-de-visite which was trimmed and later mounted on a cardboard advertisement, Hudson’s name written in ink along bottom edge of border. While not a battlefield narrative, this diary does provide an interesting glimpse into the daily life of an infantry sergeant in the year following the close of the Civil War.

James B. Hudson (1832-1918) of Providence, Rhode Island was a stone mason. During the Civil War, he enlisted for three years with the Third Rhode Island Heavy Artillery, entering as a private and promoted to sergeant by the time he mustered out in 1864. In April 1865, Hudson reenlisted with the Seventh Regiment U.S. Veteran Volunteer Infantry. This diary is from the year he spent with the Seventh. Following his military service, Hudson returned to Providence, where he resumed working as a mason and became an active member of Prescott Post No. 1, GAR. James B. Hudson died at the age of 85 on September 9, 1918. Sgt. Hudson’s sword and other items are located in the East Providence Historical Society in Rhode Island.

The entries in Sgt. Hudson’s diary begin with his reenlistment in Providence, Rhode Island on April 12, 1865. From Providence, he went to Washington DC for a few months and then to Philadelphia where he was stationed at Camp Cadwallader and then Camp Crossman. Diary entries vary in length from one or two lines to a half-page or more. Mentioned in the diary are military activities such as drill, inspection, dress parade and military school. Hudson also indicates what he eats for dinner or when he washes his clothes. As sergeant of the guard, Hudson gives particulars on who’s locked in the guard house, and he occasionally describes specific punishments given to some of the men. In addition to military activities, Hudson also mentions what he does for entertainment in Philadelphia, like going to the Chestnut Street Theater to see a play, ice skating on the Schuylkill River or visiting Fairmount Park to see the Water Works. References to “Mother” and “Tommy” are probably familiar names for his wife Mary and his young son James Thomas Hudson. The diary entries come to an end on April 11, 1866 when Hudson writes “…my time expires tomorrow. The 7th Regt. is about played out…” 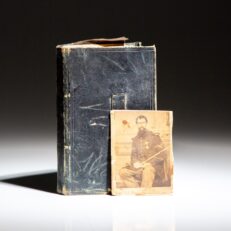