Octavo, [three volumes]. Mixed issue, with Book One being the first printing, subsequent volumes are later printings. Pictorial wrappers, titles on spines. Housed in the publisher’s custom slipcase, illustrated side panels, a fine example. This copy is signed in Book One: “To Bill, Keep the faith, John Lewis. 8-30-13.”

John Lewis (1940-2020) served in the United States House of Representatives from 1987-2020, representing Georgia’s 5th Congressional District. He was a lifelong civil rights activist, helping to organize the March on Washington in 1963, and he led the first of three marches from Selma to Montgomery across the Edmund Pettus Bridge in 1965. He was awarded the Presidential Medal of Freedom in 2011. 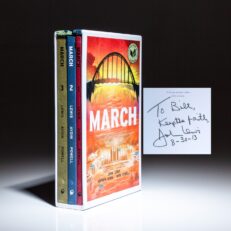