Marlborough His Life And Times

Octavo, [four volumes], [iv], 612pp; 651pp; [ii], 608pp; 671pp. Bound in full morocco goatskin, titles in gilt, dates on spines, Marlborough family crest on the cover of each volume. Five raised bands on spines, gilt top edge, marbled endpapers. This set was rebound by Henry Sotheran of London, being indistinguishable from the original binding by Leighton-Straker. Contents of the text block are near fine, with the occasional bit of toning, light foxing to verso of frontispiece of Volume I. Previous gift inscription in Volume III, ownership note in Volume IV. Each volume individually housed in rigid yellow slipcase, lined with white paper. This is a limited edition of 155 signed copies by Sir Winston Churchill in Volume I, with 150 sold to the public and 5 held back for the author’s use. This signed copy is number 20, signed by Churchill on limitation page. (Woods A40(a)) (Cohen A97.1.a) A beautiful work.

This book is the only signed limited edition published by Winston S. Churchill. He spent 10 years writing this book, which was dedicated to his ancestor, Sir John Churchill, First Duke of Marlborough. Of the deluxe edition, copy No. 1 was presented to King George V, No. 3 to the Prince of Wales (later Prince Edward, Duke of Windsor) and No. 14 to Churchill’s brother John. 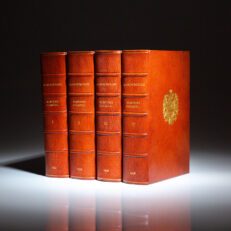