Jack Vance (1916-2013) was a prolific American science fiction, fantasy and mystery writer. This book is volume four from a series of five books known as the Early Jack Vance series. The titles in this series include: Hard-Luck Diggings, Dream Castles, Magic Highways, Minding the Stars and Grand Crusades. This limitation page was signed shortly before the author died in 2013. 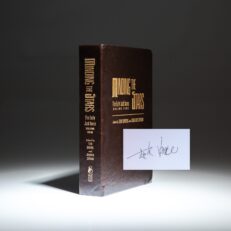