Signed edition of Nanette: A French Goat by Mireille Marokvia and illustrated by Artur Marokvia.

Octavo, 43pp, [4]. Green cloth, title in black on spine. No additional printings listed on copyright page. Solid text block, a touch of wear to edges, a near fine example. In publisher’s dust jacket, $3.00 retail price on front flap, sunning to spine, faint soiling to edges, small separation at top of spine, a near fine example. Inscription on front free endpaper reads “Thanks to you my dear Doctor. birds, bears, pigs, cats…. and perhaps snakes, not only have kept their biographer they have got a better one. / Mireille Marokvia / November 1st 1960.”

Mireille Marokvia (1908-2008) was a writer who grew up in a French village during World War I. As a young woman she lived in Paris and later married Artur Marokvia, a German painter, in 1939. The two returned to Germany to visit his family, but soon after arriving Artur was called to military service, leaving Mireille stuck in Nazi Germany during World War II. The two emigrated to New York after the war and created children’s books together until Artur passed in 1986. Mireille then turned to writing memoirs of her earlier years. 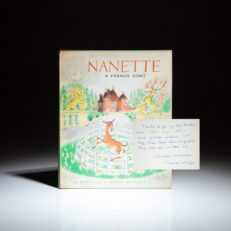