The complete three volume set of Nixon by Stephen E. Ambrose, all first printings, inscribed by the author to William Safire.

Thick octavo, [three volumes], 752pp; 736pp; 667pp. All first editions, first printings, with complete number lines. All hardcovers with cloth spines. Occasional pencil marks from Mr. Sapphire, with notes near passages pertaining to his time in the Nixon Administration. All three volumes in near fine condition, volume III with some separation at front hinge, not affecting the integrity of the text block. In near fine dust jackets, retail price on each volume, some toning to the spine of Volume II, light shelf wear to Volume I. Inscribed by Stephen Ambrose to Mr. William Safire in Volume I and Volume II. Inscription reads: “For Mr. Safire, from his fan, Stephen Ambrose.” Second inscription reads: “For Bill Safire, With thanks for all the help (see acknowledgments and footnotes and index – w/o Safire, no book), Sincerely, Stephen Ambrose.” 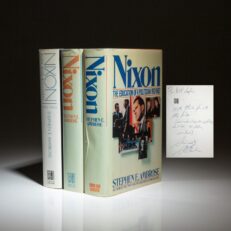