No Such Thing As A Bad Day

Hamilton Jordan (1944-2008) served as the White House Chief of Staff to President Jimmy Carter. He was one of the youngest people to serve in that position in history. His tenure was plagued with controversy, as the media portrayed him as inexperienced and a southern “good ole boy.” Mr. Jordan died in 2008 due to cancer. 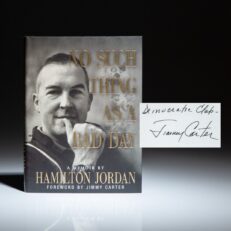