Signed first edition of Our Last Best Chance by King Abdullah II of Jordan. Octavo, xxi, 346pp. White hardcover, title in gilt on spine. First edition statement with full number line on copyright page. In publishers near fine dust jacket, touch of shelf wear to front cover, retail price on front flap, otherwise fine. Inscribed on the front free endpaper with the signature of King Abdullah in Arabic: “To Andreas / With Warmest Regards / Yours / Abdullah.” A scarce signed book from a reigning monarch.

Comments: This is the memoir of King Abdullah II of Jordan. After the death of his father, King Hussein, Abdullah II was unexpectedly named as the heir to the Jordanian thrown. His family has been the royal family of Jordan since 1921. 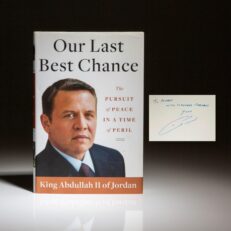 You're viewing: Our Last Best Chance – The Pursuit of Peace in a Time of Peril $750.00
Add to cart