Second edition of the Personal Memoirs of U.S. Grant by Ulysses S. Grant.

Published shortly after his death, the Personal Memoirs of U.S. Grant are held in high regard by historians and casual readers alike. President Grant was initially opposed to writing his memoirs but wished to leave his family financially stable after his death. The books were sold in multiple formats, ranging in price from $3.50 to $12.00 in 1885. 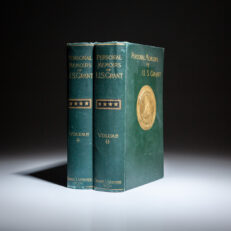