White House Photograph of President Carter meeting American soprano and founder of the Harlem School of the Arts, Dorothy Maynor.

Dorothy Maynor (1910-1996) was an American soprano, concert singer and founder of the Harlem School of the Arts. She was asked by President Harry S. Truman to perform at his inauguration in 1949, becoming the first African American to perform at a presidential inauguration. In 1995, she was invited to serve on the board of the Metropolitan Opera, becoming the first African American to receive this honor. She died in 1996. 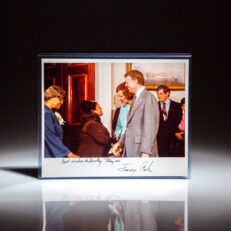 You're viewing: Photograph Inscribed to Dorothy Maynor $250.00
Add to cart