At the time of its inception in 1886, Cosmopolitan Magazine aimed to offer women articles on life in the home, but began publishing new fiction works in the early 1900s. Notable contributors included Jack London, as seen in this set, as well as Upton Sinclair, Sinclair Lewis, and Kurt Vonnegut. Short stories were published in their entireties, and longer pieces were expanded across multiple issues to keep readers interested in upcoming publications. 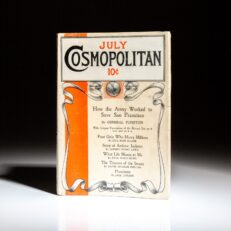