At the dedication of the John F. Kennedy Presidential Library, President Carter said that Kennedy “embodied the ideals of a generation as few public figures have ever done in the history of the Earth.” The ceremony was attended by Caroline Kennedy, Jackie Kennedy Onassis, John F. Kennedy, Jr. and Senator Ted Kennedy. 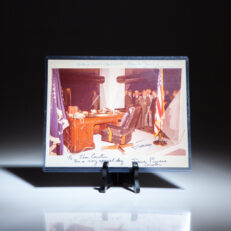