Octavo, x, [6], 395pp. Full blue morocco, gilt-ruled border on covers, title in gilt on spine with decorative raised bands and compartments. Marbled endpapers, gilt-ruled turn-ins and board edges. Bound by James Macdonald Company of New York, with stamp on rear turn-in. Complete with frontispiece portrait of Nellie Taft and 50 illustrations in black and white. All edges gilt, solid text block. A scarce example of one the earliest memoirs published by a first lady of the United States.

This copy of Recollections of Full Years is inscribed to Charles Sidney Shepard (1856-1934), a wealthy financier and philanthropist, who was a Yale classmate of President William Howard Taft. Mr. Shepard inherited his fortune from his father, an industrialist and railroad owner. After his father’s death, he became a director of the Mobile & Ohio Railroad Company, the Seaboard Air Line Railway Company and the Fort Dodge, Des Moines & Southern Railroad Company. He remained close to President Taft throughout his life, supporting his presidential campaign in 1912 and corresponding often. Shepard died in 1934 at the age of 77. 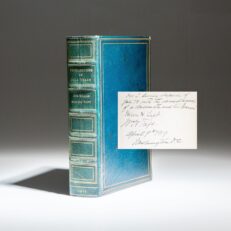