Remarks Of General Harrison, Minister To The Republic of Colombia

During William Henry Harrison’s brief term as Minister Plenipotentiary to Gran Columbia, he was ardently opposed to their leader, Simon Bolivar. Harrison claimed the country to be on the verge of anarchy and urged Bolivar to “adhere to the tenets of republicanism.” He was removed from his position in March of 1829 by President Andrew Jackson, who wished to appoint his own minister. Harrison published this pamphlet to defend his actions while serving abroad.

Full title: Remarks Of General Harrison, Late Envoy Extraordinary and Minister Plenipotentiary Of The United States To the Republic of Colombia, On Certain Charges Made Against Him By That Government 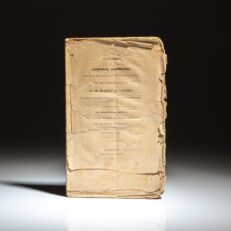 You're viewing: Remarks Of General Harrison, Minister To The Republic of Colombia $700.00
Add to cart