Attorney C. David Ginsburg was a young lawyer in the New Deal Agency called the Office of Price Administration. In 1942, in need of young and talented lawyers, he hired a new gradate from Duke University, Richard Nixon. This work by former President Richard Nixon was published in 1992. It would be the last book that President Richard Nixon released before his untimely death in 1994. This book examines the political implication of a post-soviet world order. It implores political leaders to ?seize the moment? in history, but was at odds with the post-Cold War doctrine of George Bush, which emphasized stability. Nixon advocated for democracy in all corners of the globe, sometimes at the expense of stability. 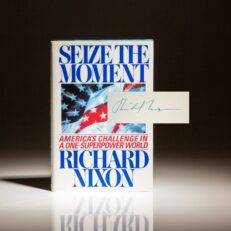