Bob Beckwith was a New York City fireman for 30 years, from 1964-1994. After seeing the destruction of the World Trade Center towers on September 11th, 2001, Beckwith wanted to help with the rescue operations at Ground Zero. On September 14th, Beckwith was asked by Secret Service agents to help find a place for President George Bush to address a crowd of rescue workers. He found a fire truck and climbed up to test its stability. With George W. Bush at his side, Beckwith handed the President a bullhorn to make a short speech to the crowd. A photograph of Beckwith and Bush appeared on the cover of Time magazine. 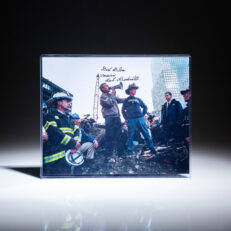