Photograph of President Gerald R. Ford, Senator Lloyd Bentsen and Alan Greenspan, inscribed by President Ford to Senator Bentsen. Additionally signed by Alan Greenspan. This photograph was taken on September 5th, 1974 at the Conference on Inflation, held in the East Room of the White House.

Photograph measures 16″ x 13.” Printed in black and white with white border. The word “Bentsen” in pencil on the back panel. Signed by Alan Greenspan in black pen. Inscribed by President Gerald Ford: “With warmest personal regards, and with appreciation of our fine friendship. Very best wishes. Jerry Ford.” Provenance: From The Estate of The Honorable Lloyd & Beryl Ann Bentsen, September, 2020.

When President Ford took office in August of 1974, the United States economy was beset with high unemployment and inflation. As a conservative, President Ford sought ways to encourage personal responsibility to combat inflation, without dramatic increases in government spending. This conference resulted in the Whip Inflation Now (WIN) program, which encouraged disciplined spending habits. It is regarded as a blunder by the Ford Administration, with people mocking the acronym and being viewed as too small an initiative to fix the economic issues. 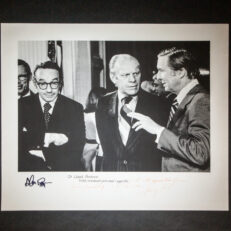