First edition of Speeches and Addresses by William McKinley, with a presentation inscription by the future president.

Inscribed on the front flyleaf: “To Mr. F.M. Stanwood, With sincere friendship of William McKinley. May 3/95.” From The Forbes Collection of American Historical Documents, Christie’s New York, May 2006.

The recipient of this book was likely Francis M. Stanwood of Boston, the nephew of James G. Blaine and the editor of the Boston Journal. Stanwood visited Governor McKinley in Columbus, Ohio on May 3, 1895, spending the day together. The visit was notable because Stanwood was a Republican organizer in New England and a coveted endorsement for any presidential contender. The visit sent the Republican establishment in New England “into a frenzy,” thinking the 1896 Republican nominee was likely to be Speaker of the House, Thomas B. Reed of Maine. The eventual endorsement of Mr. Stanwood helped to secure the 1896 Republican nomination for William McKinley and Garret Hobart, who were nominated on the first ballot of the convention. 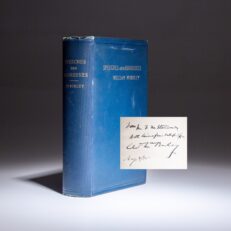