Tales Of The Fish Patrol

First British edition of Tales of the Fish Patrol by Jack London. 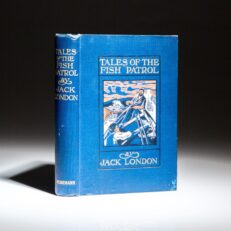