That Reminds Me – The Autobiography Of The Veep

Comments: Alben W. Barkley served as Vice President of the United States in the second Truman Administration. Before his time in the Truman Administration, Barkley served in the United States Senate, representing the state of Kentucky. He was the Senator Majority Leader from 1937-1947 and Minority Leader from 1947-1949. When Truman announced he would not seek another term in 1952, Barkley was interested in the presidential nomination, but at 74 years old, he had trouble convincing the democratic party he had the stamina to serve. 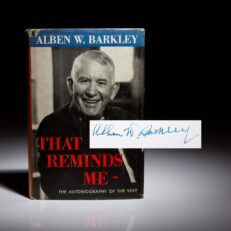 You're viewing: That Reminds Me – The Autobiography Of The Veep $325.00
Add to cart