Octavo, xviii, 657pp. Full contemporary calf in a hand-sewn cloth cover with stitching visible inside the volume’s front and back covers. Stated “July 1833” at bottom of title page. Original owner’s name painted on front panel of cloth cover, dated 1833. Cover torn and frayed with some loss, heavily soiled. Cloth cover has not been removed to inspect beneath. Leather which is visible is rubbed and worn through in places. Binding stable, but joints cracked with spine beginning to separate along the lower rear edge. Browning and dampstaining to text pages. A few closed tears and some dog-eared pages. Black stain on bottom edge of text block. All 19 maps present (many folded), most in very good condition with some browning and a few dampstains. Map of “Long Island Sound” is mounted on stiff paper and has the most wear, possibly due to heavy use by Capt. Crowell. Map is stained with a few closed tears and a notation in pencil, unable to unfold completely as last fold is pasted down to verso. Handwritten notations on front and rear endpapers and pages 187 and 422. Notation on front free endpaper: “Oren Crowell / His Book / Bought / In Boston / Sept 20th 1833 / Price $3.50 cts cash.” A unique piece of seafaring Americana.

Full title: The American Coast Pilot: Containing Directions for the Principal Harbours, Capes, and Headlands, on the Coast of North and South America: Describing the Soundings, Bearings of the Lighthouses and Beacons from the Rocks, Shoals, Ledges, &c. with the Prevailing Winds, Setting of the Currents, &c. and the Latitudes and Longitudes of the Principal Harbours and Capes; Together with a Tide Table. Oren Crowell was born in Yarmouth, Massachusetts in 1808 and eventually lived in Hyannis. By the 1830s, Crowell was a sea captain sailing out of the port of Boston, often aboard packet ships traveling to Baltimore or New York. Advertisements in the Boston newspapers show him commanding the brig Mary Stanton and the schooners China, Splendid and Lewis. Around 1856, Capt. Crowell moved to New Orleans and became a ship chandler in partnership with Elijah Taylor under the firm name of Crowell & Taylor. About a year later, Crowell & Taylor became Crowell & Hallett, with Jacob P. Hallett becoming Capt. Crowell’s business partner. On July 13, 1858, Capt. Oren Crowell unexpectedly died of yellow fever. He is buried in Oak Grove Cemetery in Hyannis, Barnstable, Massachusetts. 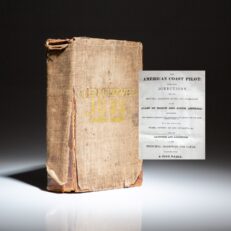