First American edition of The Bell Jar by Sylvia Plath.

Sylvia Plath (1932-1963) was an American poet and short story writer. The Bell Jar was her only novel. The book was originally published in England in 1963 under the pseudonym “Victoria Lucas.” Plath died by suicide a month after its publication. In 1967, the book was published for the first time under Plath’s name, but it was not until 1971 that it was finally published in the United States. The Bell Jar was adapted into the 1979 movie of the same name, starring Mary Hassett and Julie Harris. 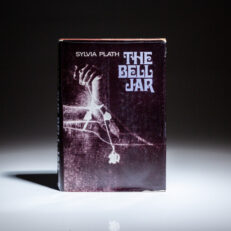